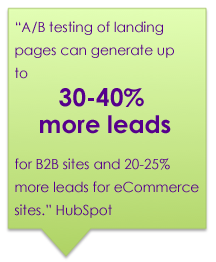 Many clients ask me why I write two ads for a single online campaign they are running, whether it’s Google AdWords, LinkedIn Ads, or even email marketing?

I reply, “If you aren’t split testing, how do you know what really works?”

For those unfamiliar with split testing—or A/B testing—it’s basically taking the same marketing concept for an ad and changing one thing to help determine its overall effectiveness.

Share your successful A/B split-testing story. What worked and why?

If you need help with split testing your ad campaign, whether in email, on Google AdWords, or in social media, reach out to us.

This site uses Akismet to reduce spam. Learn how your comment data is processed.